Dr Mayooran Shanmuganathan, a cardiologist from the UK, has been conducting regular free cardiology clinics with Assist RR in Mannar, Killinochchi and Mullaititvu over the past 2 years. Assist RR has bought and donated several cardiology medical equipment with the help of crowd-sourced funds of over £65,000. One such equipment is the echocardiogram machine donated to Kilinochchi hospital in July 2018 through the generous donation of £27,500 by Mr Vinoth Varatharajan, who is a good friend of Dr Mayooran. This echocardiogram machine has helped Dr Mayooran and colleagues conduct clinics in Mannar, Killinochchi and Mullaititvu since then. Mr Vinoth Varatharajan had also told Dr Mayooran that if a patient scanned with this machine requires life-saving surgery, he would fund it. One such patient is Mr Anthony from Mannar. He is a middle aged man with a young family of 2 children and wife and earns his living by doing painting, decorating and metal welding. He had lost one of his legs during the civil war. Assist RR was so impressed by his steely determination to be self-sufficient and independent, that it supplied him with a welding mechanical equipment in 2017 to help him make an income. Dr Mayooran has also been seeing him regularly in the cardiology clinic as he has a condition called ‘Hypertrophic Cardiomyopathy’. In other words, he was born with this condition which has resulted in his heart muscles being thicker than normal and renders him at risk of sudden collapse or death due to dangerous heart rhythm problems (arrhythmias) or lack of blood circulation from the heart.

Recently, Mr Anthony had reported to Dr Mayooran that he had a collapse and that he was seen by cardiologists in Jaffna and in Colombo and that he was recommended to have a surgery for implantation of ‘internal cardiac defibrillator’ or ICD. This is a pacemaker box like device and is placed in the heart. It will monitor the patient’s heart rhythm at all times and will administer an electrical shock internally to terminate any fatal heart arrhythmias and save the patient’s life. He was told to either purchase this privately for 900,000 Sri Lankan rupees (approx £4300) or wait for funds to come from the Ministry of Health. He had waited for over 6 months and unfortunately the Governmental support did not materialise. Alarmingly, he developed another collapse and was hospitalised in Mannar in the middle of June this year. His wife called Dr Mayooran asking for urgent help. Immediately, having remembered Mr Vinoth’s promise to help in such cases, Dr Mayooran called Mr Vinoth, who without any hesitation released £4300. Dr Mayooran made contacts with the local cardiologist (Dr Bhanu) and the private supplier of the ICD and Mr Anthony was promptly transferred to the National Hospital in Colombo where he underwent his life-saving surgery within 5 days of the SOS call from his wife. He has since returned to his home in Mannar and has sent a heart-rendering message of gratitude. Assist RR is very happy to have organised this life-saving surgery and would like thank Mr Vinoth Varatharajan for once again contributing so generously. It is people like him we need. Please spread the good news and together we can do so much for so many needy people back in our motherland! 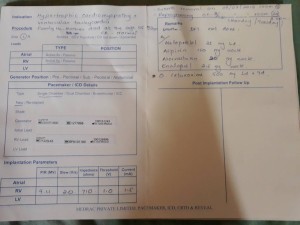 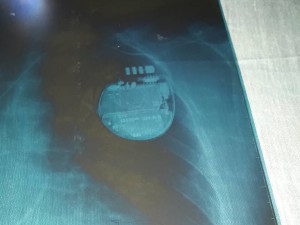