AssistRR, with the support of like minded organisations (IMHO USA, Tamil Forum Malaysia and CHRF UK) have been donating fishing equipment to families who were displaced from their coastal villages due to the war and were living without carrying out their livelihood. Many of them have been working as labourers for very little and have been struggling to look after their families. As the capital investment to buy a boat, engine and nets is around Rs 600,000.00 per one set, these families have been unable to afford to invest in the fishing equipment. AssistRR carried out a pilot study in Sampoor, Trincomalee, by providing 10 sets of equipment (one set = 1 boat, 1 engine and 10 nets) to 50 families to be shared between them. Data gathered later showed that these families were earning very well and one family had already bought a boat of their own. AssistRR therefore wanted to expand this to other areas and partnered with IMHO USA to raise funds to donate more boats. Solihull Junior School Head Master, Mr Mark Penney and Mrs Donna Penney voluntarily came forward to walk 55kM to raise funds for this cause and walked in the UK on 25 Aug 2018. Following their walk, they raised nearly £50,000.00 in the UK and USA. Using this sum and funds raised at AssistRR dinners, AssistRR have now donated 28 sets of boats, engines and nets, in addition to the 17 sets donated (by IMHO USA – 10, TFM – 5, & CHRF UK – 2) earlier in Trincomalee district. In total 45 sets have already been given and are being shared by 225 families. The families are earning around Rs 3000-4000 per day and are very grateful to Diaspora Tamils and other nationals who have contributed. AssistRR also would like to thank all those who were involved in this project and enabled families to stand on their own feet. In particular, we would like to express our gratitude to Mr & Mrs Penneys for their hard walk and for raising the enormous sum of £50,000.00 towards this project. We are indebted to them for their tireless services to the victims of war in Sri Lanka. 14 sets were handed over to the beneficiaries by Mr & Mrs Penneys during their visit to Sri Lanka in Oct 2019. 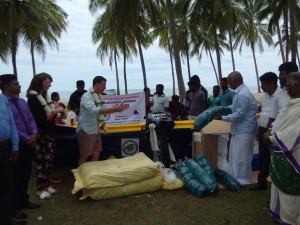 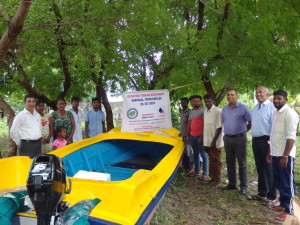 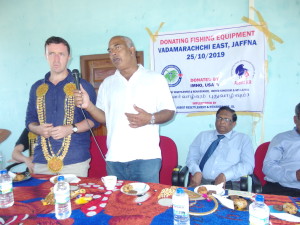