Manatkadu village, along the east coast of Jaffna peninsula, was badly affected by the 2004 Tsunami. 72 villagers were killed including 19 school children. J/Manatkadu CTM school and all the houses were destroyed by the Tsunami. The school has been functioning in a building built by the parents, a temporary shelter that was built after the Tsunami, in the corridors of the next door church, and under trees. Sadly, even after 12 years of Tsunami, the temporary metal shelter is being used for classrooms. The school is near the shore and within the Tsunami zone. A land outside Tsunami zone has been identified and the Northern Provincial Council (NPC) want to build a school in this new land. People have already move out of the Tsunami zone and are living around the land identified for the school. The locals desperately want to have this school in their new settlement, as the children are walking a long way in very hot conditions and without wearing shoes. The temporary metal shelter is also proving to be too hot and is not conducive for learning.

Further to our visit in March 2016, Assist RR approached a number of organisations for funds and managed to secure sufficient funds to construct a 2-storey building. The donors are: Puloly Pandithar Kandiah Vinasithamby Family Trust Fund, UK; Malaysian Tamil Diaspora; Building Blocks, UK; Assist RR. Assist RR would like to thank the above donors for coming forward and for helping the village to have an acceptable and safe environment for their children’s learning. Further to securing funds, foundation laying ceremony was conducted on 21 April 2016 at the new school site. The governor of NPC, Hon Mr R Cooray, Jaffna GA Mr Vethanayagan, NPC Education Minister Hon Mr Kurugularasa and many others including Mr Kandiah Manikkam representing Pandithar Vinasithamby Trust Fund participated in the ceremony. A few photos of the ceremony are also attached. The building would be completed by Sept 2016. Since we agreed to do this project, the NPC has also laid foundation for a second building on the same day. This will ensure that the whole school will be relocated after completion of these two buildings. 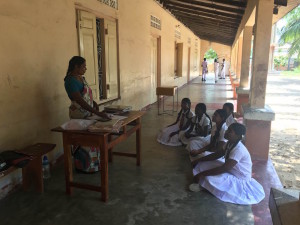